Framing a basement in Denver

The question often comes up on how ElkStone frames our basements.  One issue that is whether to frame the studs at 16 inches on center or 24 inches on center.  Typical structural construction requires studs to be framed at 16 inches on center.  The basement walls however are not structural and most of the time in the Denver metro area the walls are actually floating.  The soil in the front range of Colorado often contains bentonite which if it becomes wet will contract and expand.  Because of this condition, the building code requires the basement walls to literally be hung from the first floor joists above.  The bottom of the wall is anchored to a floor plate by extra large 60D nails.  If the floor does heave or settle the wall will float or slide on the 60D nails.  The floating walls are structural only in that they keep the drywall and trim in place but they won’t push up on the floor joists above which would cause significant structural damage on the floors above and throughout the house.  Symptoms of structural problems from non-floated walls are sticking windows and doors, and cracking drywall. 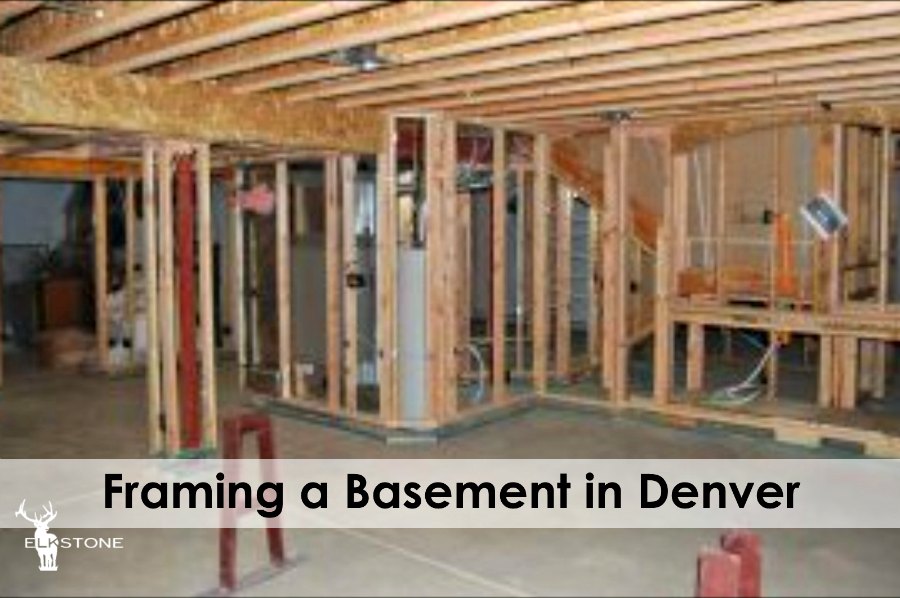 When a lot is in consideration for new home construction one of the first things a builder does is order a soil survey.  A geoscience company will drill several test holes on the property where the home will be placed and submit the dirt core to a lab for testing.  If the test results contain a certain amount of bentonite then the engineer will recommend a floating basement floor and a foundation supported by piers instead of a footer.  You would recognize this if your basement floor is wood or if you have a concrete basement floor with a crawl space below it.  You can identify this if there is an access panel in your basement floor that opens to a crawl space below.

Back to framing.  A stud is defined as a dimensional lumber that has a specific length.  Most often we purchase studs but because we’re working in a confined space between the basement floor and the bottom of the 1st floor joist above, we can rarely use the full length.  Studs are intrinsically not straight because they are cut from a tree which has a grain.  The studs are kiln dried and often twist and bow in the drying process according to their grain.  Because of this it’s my theory that the less you sample the studs the straighter the wall.  In other words, the drywall we attach to the wall comes in contact less with the studs framed on a 24 inch on center wall than a 16 inch on center wall thereby making the wall straighter than if you attached it more frequently to the studs.

Another reason we choose to frame basement walls at 24 inches on center is that it uses less lumber.  This has several benefits. First, since it requires less lumber this conserves natural resources.  It also keeps costs down and is less work for the framer.  It’s also less work for the electrician and plumber who have to run their wires and pipes through the studs so they don’t have to drill as much.  Because framing the studs 24 inches on center it makes easier it’s also faster which also costs less.  In theory you could frame the studs at 8 inches on center but this is silly.  It costs more in materials and labor, takes longer, and isn’t necessary.  So why go through the expense if it’s not needed.  Some will argue that the walls are sturdier.  I’d agree with that but it’s not a practical matter.  There’s no instance I can think of that the walls need to be sturdier throughout the basement space.  Obviously there are certain places where we beef up the wall with extra studs for a wall mounted TV or wall cabinets but from a day to day practical matter, I don’t see where you’d need the walls to be sturdier than what 24 inches on center provides.

Have a different view or angle to consider?  I’d love to hear your thoughts so please leave a comment below.

See All Cities We Serve